Mike Bachara Is Committed to Doing The Job Right

Owner of Pro Count West, Mike Bachara, has been involved in the auto industry his entire life. His motive to pursue a career in this industry stemmed from his passion for cars and his father’s business. He personally oversees each project to ensure that every client gets the service they deserve.

On Saturdays, as a kid, Mike would go with his father, Terry, to the car dealership where his father worked as a Parts Manager. Mike spent his time tidying up the shelves and familiarizing himself with the ways of a parts department.

In 1981, his father founded an inventory business in Chicago, where Mike learned more about the trade.

At a young age, Mike knew he wanted to work in the car industry and eventually own his own business. Right out of college, he got a job working at a dealership as a delivery driver.

After a few years in various positions, Mike had worked his way up to become a Parts Manager at only 23 years old.

During his 14 years as a parts manager, Mike was awarded “Highest Gross Profit” and “Most Improved Parts Department” at multiple dealerships.

Mike and his family moved to Arizona in 2001, where he noticed a need for an inventory company on the West Coast. He started Pro Count West in 2002 as a part-time project, while he continued to work as a Parts Manager.

When the recession hit in 2008, the dealership he worked for filed bankruptcy. Even though the auto industry was facing hardships, Mike saw this as an opportunity to expand Pro Count West.

Pro Count West is now a national company and Mike travels from coast to coast. His favorite part of the job is meeting and developing relationships with people all over the country.  Since starting Pro Count West, Mike has ventured into auto delivery and staffing with his companies Dealer Driver Services and Pro Dealer Staffing.

Mike In The News

Satisfied Customers Are Our Greatest Advocates!

Read What Our Customers Are Saying About Pro Count West!

"Mike Bachara has helped us increase both sales and gross profit for our fixed operations in a very tough economic time. Pro Count West accomplished this AND helped us shed unnecessary expense."

"Our initial introduction to Pro Count West was in 2008. Mike performed an Inventory and Parts Termination Return service for us at a large dealership. The total amount of inventory was $2.5 Million with virtually no rejected parts."

"Pro Count West's crew was both very professional and extremely accurate. I was surprised at how efficiently they worked to inventory just under $2 Million in parts for our company."

We have used Mike and his company, Pro Count West, for over 15 engagements, with more than $9 Million of parts involved, and received numerous compliments on their level of professionalism and accuracy.

Jerry
Ally Financial
Get a Quote

Gain the insight you need to stay on top of your auto parts inventory in this free PCW guide. 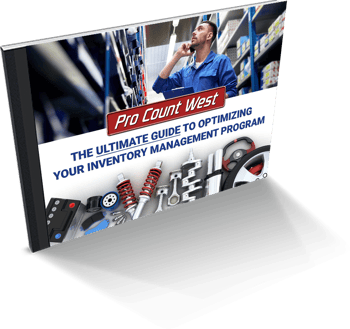 We offer a wide range of automotive inventory solutions that will help ensure that you are optimizing your dealership's potential.

With decades of experience, we provide auto parts Inventory Services and Consulting for Dealerships nationwide!